Girls’ networks: Together we are strong 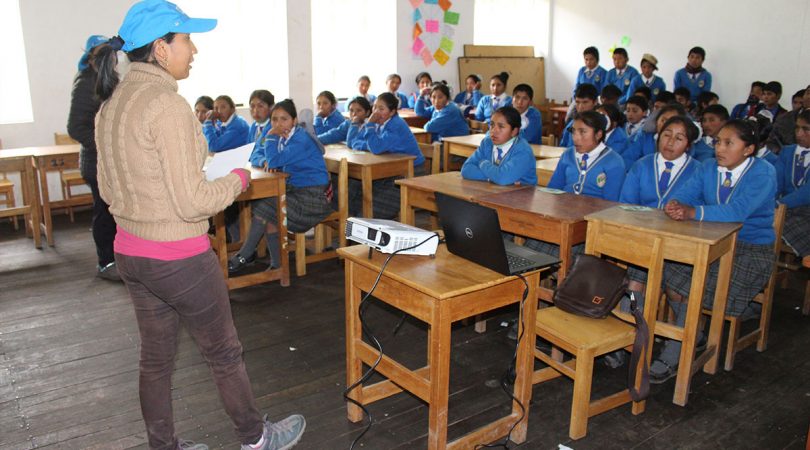 We have successfully completed the project Girls’ Networks: Together we are strong.

Latin America is considered as one of the most disparate regions in the world. Indigenous girls and young women in particular are often discriminated against – because of their age, gender or membership of an indigenous population group. However, they can hardly make their concerns heard by authorities or government due to the lack of appropriate participation structures. They lack the opportunity to draw attention to grievances such as insufficient access to education, poor career prospects, sexual violence or child marriage so that they can be addressed.

What we want to achieve

With this project, we strengthen indigenous girls and young women and empower them to stand up for their rights. They learn to exert influence so that political decision-makers change the general conditions and thus enable them to participate in public decision-making processes. In Guatemala, 1,000 teenagers aged 14 to 18 years and in Peru, 1,080 teenagers and young adults aged 14 to 21 years participate in the project activities. We also support 300 indigenous teenagers and young adults in nine Latin American countries as part of the regional project.

We actively involve local authorities and governments in our work. Together with them and the teenagers, we identify the factors that hinder the political participation of teenagers. We then conduct training courses to show how important it is for teenagers to be involved in public and political processes. In the next step, we will work out together how to create permanent mechanisms and participation structures for young people.

In training courses, we provide young people – including many girls and young women – with the knowledge they need to promote equal rights. They learn to critically reflect on social and gender-specific roles and to discuss and exert political influence with their parents, community members and municipal decision-makers.

Together with the girls and young women, we are developing plans in which we define important topics for which they want to get politically involved. We then determine how these plans will be implemented and which partners need to be involved in the political influence work. These so-called advocacy plans start at the community level and eventually reach decision-makers at regional and national level through the groups and associations of girls and women.

In order to eliminate stereotypes and role assignments that restrict indigenous girls and young women in the implementation of their projects, we organise dialogue events in the social environment of girls and women. In particular, the parents of the teenagers should be encouraged to support the children and to value their work for more political participation. In addition, we plan and implement initiatives and information campaigns together with teenagers on the subject of child marriage and the problem of discrimination and stigmatisation of indigenous cultures. In this way, public’s awareness regarding the rights of women, girls and indigenous population groups is raised and the rethinking of society is encouraged.

Review and evaluation of project activities

Throughout the entire duration of the project, regular meetings are held with the teenagers to discuss the progress of the project, exchange experiences and make any necessary corrections in the implementation of measures. An internal review of the project’s progress will take place halfway through the project period and an external evaluation will be carried out at the end of the period.

We have already been able to support this great project with 4.400 Euros.