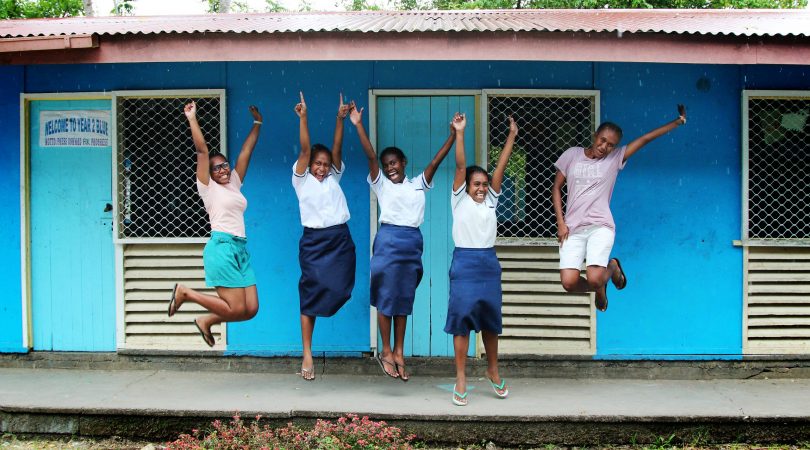 The Solomon Islands are one of the least developed countries in Oceania. The impacts of climate change are already being felt there, threatening the livelihoods of many people in this South Pacific nation of hundreds of islands. Rising sea levels, coastal erosion, storm surges and saltwater intrusion into groundwater threaten the numerous settlements near the coast as well as the food security of the entire population.

Marginalised demographic groups, such as children, women, people with disabilities and indigenous peoples, are particularly affected by the impacts of climate change. Existing inequalities are further exacerbated as a result. They have less access to resources and information, and are hardly involved in decision-making processes. Yet young people and women make up the majority in the informal settlements threatened by rising sea levels. However, they are largely excluded from urban planning and administration. In rural areas in particular, girls and young women have hardly any say. They are confronted with great uncertainties due to social and climatic changes, but have no possibility to influence how the challenges are dealt with. Village life and organisation in society are traditionally patriarchal and have been supported by a complex set of gender norms for decades. This makes it difficult for girls and young women to participate in public life and decision-making processes. Gender justice has been recognised as a crucial factor in international climate policy in recent years. The Paris Climate Agreement of 2015, for example, calls for gender justice and women’s empowerment to be taken into account in all climate change activities. This is also where our project comes in.

Aim of the project

The aim of the project is to empower girls and women so that they can influence and drive decisions on climate protection at a local and national level. To this end, we want to enable girls and young people to define, represent and promote their own needs, wishes and ideas for climate protection. We also connect them with regional and international youth climate activists.

Our holistic approach is based on the assumption that effective work is not possible without increased awareness in the communities. We therefore work with girls, young women, communities, the government, the church and civil society organisations. We wish to strengthen civil society organisations on the Solomon Islands by enabling greater access to resources and capacity building, therefore also enabling young people to drive local climate action themselves. Decision-makers in communities, government and the church will also be sensitised to take greater account of the voices of girls and young people.

Analysis of the initial situation

At the beginning of the project, an analysis will be conducted to shed light on the current capacities of young people and civil society organisations in the field of climate protection. This will identify opportunities but also obstacles for young people, especially girls and young women.

To empower girls and young people to advocate for their needs, wishes and ideas on climate protection, we want to improve their access to information and training opportunities. To this end, we offer training on leadership, systems thinking and long-term planning. In addition, we train young climate activists on politics, advocacy and campaigning. As part of a support programme, we help young people mobilise resources for climate protection measures and implement their own climate projects, such as planting mangroves. We also support groups of young people in identifying and solving local challenges caused by climate change. The groups are to be empowered to receive community support and to draw on local resources. To enable project participants to engage safely, we create spaces where they can engage in climate action in a protected way.

Local organisations are strengthened in their protection and risk management. The aim is to create an environment in which young people can get involved and become role models without running the risk of discrimination and assault.

Young people are provided with platforms, where appropriate and safe, to voice their climate change needs. In this way, their concerns can be raised and heard in relevant decision-making forums and with key stakeholders such as political, church and civil society decision-makers. In addition, materials for education, advocacy and campaigning are being developed.

We were already able to support this great project with 6000 Euros.