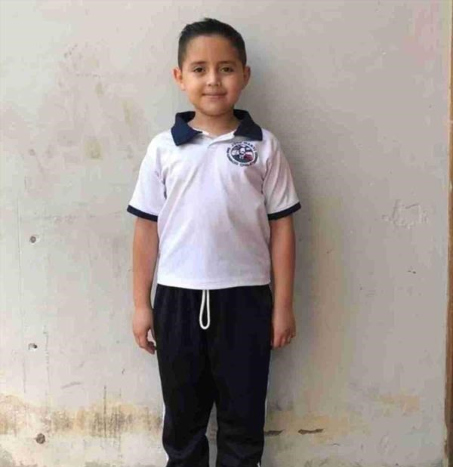 We have taken a sponsorship for Edgar from El Salvador. The sponsorship assures that children receive a good school education and live in a safe environment – the foundations for a better future and better chances in life.

Edgar lives with his parents and his little sister Alison. His mother works in the private sector and his father is a mechanic. He also has a grandfather and a grandmother. In the meantime his grandfather separated from the family and moved away. In this country, many children live in large families.

Edgar attends primary school, less than 30 minutes away from his parents’ home. His favourite subject is maths.

Edgar has received all the basic vaccinations. According to the family, Edgar has always been healthy and had no serious illnesses.

Edgar’s family lives in a house of plastered, air-dried clay bricks with a roof of shingles and a cement floor. The family uses wood for cooking.

The family draws water from a water pipe in the house.

The family uses a toilet with flushing.

The nearest health facility is less than 30 minutes away.

Description of the Program Area

The area is located in the north of the country, covers an area of 2,016.6 square kilometers and has 192,788 inhabitants. The region is known for its rich biodiversity. Also, the largest amount of electricity produced by hydroelectric power in the whole country is generated here. Chalatenango is the department lying the highest above sea level in El Salvador. In the 1980s, Chalatenango was one of the areas most affected by the then armed conflict. Many people from the region were driven away by the conflict, but in the early 1990s, after the signing of a peace agreement and the ending of the conflict, the population increased again. In Chalatenango there is a temperate climate with summer and winter. The culture is shaped by religion, the majority of the population is Catholic. In June, people celebrate a feast in honor of their patron saint, John the Baptist. The most important source of income is agriculture, as well as making decorative wooden crafts.

45.88 percent of the population of Chalatenango is affected by poverty. Young people have few opportunities to develop, access to education and health facilities is limited, there is a high degree of social and gender-based violence, and the vulnerability to disasters is high. Children and adolescents are not involved in decisions that affect them directly. The indicators used to assess the children’s situation are alarming. Infant mortality is 7.46 per 1,000 live births. 17.4% of the children in the first year of school are not developed according to their age and 5.4% of the children under five are deficient in nutrition. Only 2.53% of infants participate in an early childhood program and 56% of children attend preschool.

In the last 12 years Plan has made significant progress in Chalatenango. Among the successes are for example the following measures: